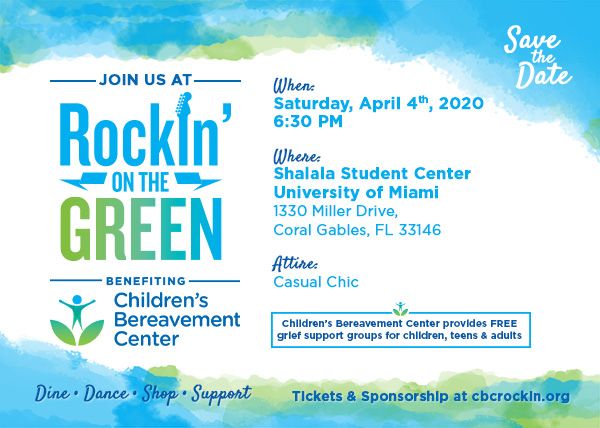 Save the Date - Rockin' on the Green is April 4th!

Join us, and over 500 guests, on Saturday, April 4, 2020 at the University of Miami's Shalala Student Center, to celebrate the Children’s Bereavement Center!

Highlights of the evening include a delicious catered dinner by Chef David Schwadron, live music and exciting auction items!

We will also honor a few exceptional people who are true leaders in the community:

Penny Shaffer is the Florida Blue Market President for South Florida. In this role, Dr. Shaffer is responsible for the company’s business operations in an 8-county region from the Keys north to the Treasure Coast. Prior to joining Florida Blue in 2006, Shaffer had a distinguished 26-year career as a senior executive at AT&T. Throughout her career, Penny has been active in many communities and is a CBC advocate.

With a background as a school psychologist and Special Education instructor, Ed Golden has been practicing law since 1977. During the last 30 years as a Miami-Dade County probate lawyer, he has been focusing on the areas of Probate, Guardianship and Trust litigation and administration. Ed is currently a CBC Board Member.

Megan Fitzpatrick is a dynamic educator and student success strategist who worked in MDCPS for 7 years as a math teacher. After earning her MBA, Megan started The Fitz Solution, a consulting company that empowers preteens, teens and young adults to thrive socially, academically, and professionally. Megan was first impacted by CBC as a group participant after her mother’s passing. She later became a group facilitor and is now an active CBC board member, advocating for our mission and helping to reach more grieving children and families in need of support.

Table sponsorship is available; contact our Marketing Director, Katelyn Gimbel, for more details at 305-423-6001 or katelyn@childbereavement.org.

With the help of our friends and supporters for the past 21 years the Children’s Bereavement Center (CBC) has provided free grief support groups for thousands of people, empowering children, teens, adults, parents and caregivers to build resilience and hope after the loss of a loved one. The CBC is now serving Miami-Dade, Broward and Palm Beach counties.

We hope you will join us at Rockin' on the Green April 4th!